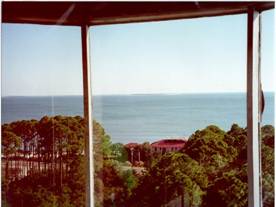 View from the Crooked River Lighthouse

The Crooked River Lighthouse was built in 1895 to replace one on Dog Island that was destroyed in a hurricane in 1873. Authorities decided it would be better to have a lighthouse on the secure mainland rather than the exposed Dog Island.

There were a variety of problems and it took a while for the Crooked River Lighthouse to be built.  When built there was a keeper’s cottage on one side and the assistant keeper’s house on the other side. Electricity came to the lighthouse in 1933 and it became automated in 1976. 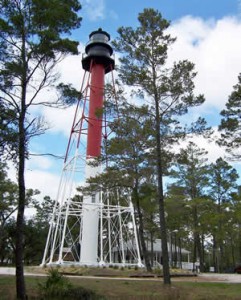 The lighthouse was decommissioned in 1995 and is no longer an active light. It had a fourth order lens which was removed in 1976 because of mercury seepage. The lens was built in 1894 by Henri LaPaute in Paris, France. The lens is currently on display at the U.S. Coast Guard’s District 8 Headquarters in New Orleans. The two keepers’ cottages were sold to private individuals in 1964 and moved from the grounds of the lighthouse. One has since burned.